Echo Of Her Presence by Alaina Stanford

I have one of those brains that won’t turn offÂ at night. Many nights I would distract my intellect by revamping a movie, bookÂ or TV show in my mind. I would twist and turn the plots and characters toÂ achieve the ending I preferred. That developed into side stories about myÂ favorite minor characters. Each night I fell asleep in the middle of a grand
adventure. It wasn’t long before I began to create stories of my own and putÂ pen to paper.
I love a good adventure. I love a good romance.Â As the mother of seven children, I also learned to love to play video games.Â One day it occurred to me to write an adventure that flowed like a video gameÂ and I added a touch of romance. Thus, Hypnotic Journey was born. The HJÂ characters are like a family to me. They are foolish, daring, resourceful,
passionate and dedicated to their friends.
My love for Science Fiction gave birth to theÂ Treborel Series. Itâ€™s a paranormal Sci-Fi romance featuring a psychotic villainÂ and a multiple layerÂ of hero’s fighting to survive the chaos.Â I write about how friendship and love can carryÂ you through situations that you might not otherwise survive. You will find myÂ stories exciting and steamy, but I am not an erotic writer. My stories fade toÂ dark when the steam begins to rise, but take it from me, the steam does riseÂ and emotions do soar.
Follow Alaina’s pages

Ariel carried the ultimate burden of failure on her shoulders. She’d fallen victim to the oldest trick in the book. Angel’s aren’t supposed to fail, angels aren’t suppose to fall in love. Her failure concerned both. In her moment of weakness she had not only failed mankind, she had failed God. Now her heart was an island of ice encased behind a steel barrier no one could penetrate. Not even her divine partner Met.

Ariel’s heart was locked away forever. Then she gazed into the steely gray eyes of a stubborn Texas rancher. 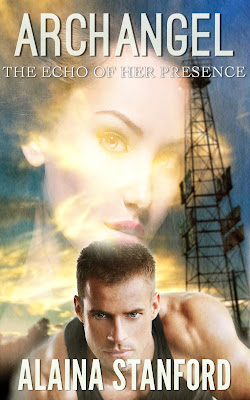 Get your copy today!

Â Snippet Time!
Even angelâ€™s get sunburnt.
Arielâ€™s ivory skin held a light pink glow. The Texan sun was merciless. She
gazed across the cattle range searching for her target. The drought was real
enough. Even the usually humid Texas air was so dry the sweat didnâ€™t have time
to form on her skin. Her long chestnut hair flowed freely about her shoulders
as a hot wind brushed against her.
She left her wings extendedÂ in an attempt to shade her bare arms and back. A tan top and jeggings were a
bad choice of wardrobe for today. Â Neither were the white tennis shoes on this
rocky soil. TheÂ unhindered sunlight illuminated theÂ  cobalt blue center of her wings that wereÂ wrapped
in a deep purple hue which sprang from an emerald green base. Her wings ended
with a thin tan border. â€œSPF 50,â€ she muttered, licking her parched lips. â€œAnd
a side ofÂ icy bottled water. That would make my day.â€
Bringing rain to aÂ drought plagued land was a slow process. Ariel found the dry stream bed she was
searching for and glanced up at the sky. She spread her arms out wide and
closed her eyes, concentrating. If she pulled storm clouds to her too quickly
the resulting storms could devastate the entire southern region of the US. High
winds, Tornados, flash floods, and destructive lightening running ramped across
the land would not put her in favor with the Big Guy.

She wiggled her fingersÂ as her thoughts flowed west across Texas toward Mexico and the Pacific Ocean.
The jet stream ran directly across Mexico from the ocean toward Texas. Then she
reached north past New Mexico, Arizona and Nevada to the jet stream that rushed
across California and down into Texas. She gently pulled moisture toward Texas.
It would take several days possibly a week or more for enough moisture to build
and move into the state. She had to bring it slowly to avoid torrential rains
that would do nothing more than produce run off and flooding.

This entry was posted on Thursday, December 10th, 2015 at 07:00 and is filed under Book Highlight, Fantasy, Relationship tips, Romance. You can follow any responses to this entry through the RSS 2.0 feed. You can leave a response, or trackback from your own site.

10 Responses to “Angels aren’t suppose to fall in love”

Leave a Reply to Michele Hayes