GrabÂ her. She must be a spy. Or a traitor. Either is punishable by death

An avid gardener, artist, musician and writer, Emily-Jane Hills Orford has fond memories and lots of stories that evolved from a childhood growing up in a haunted Victorian mansion. Told she had a â€˜vivid imaginationâ€™, the author used this talent to create stories in her head to pass tedious hours while sick, waiting in a doctorâ€™s office, listening to a teacher drone on about something she already knew, or enduring the long, stuffy family car rides. The author lived her stories in her head, allowing her imagination to lead her into a different world, one of her own making.Â 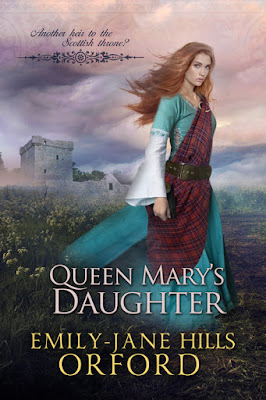 There are so many possibilities that affect the course of history. One change, one small item overlooked, can make a world of difference, not only in a person’s life, but in the history and well-being of an entire nation. And then there are those multiple scenarios of what if? What if King James VI of Scotland didn’t succeed in amalgamating Scotland with England? Would Scotland have remained free and independent and a nation of its own well into the twenty-first century? And would Scotland, this independent version, make its own decision to join the European Union when its southern neighbor was choosing to pull away? And, what if there was another heir to the Scottish throne?
In Queen Mary’s Daughter (Clean Reads Publisher), author Emily-Jane Hills Orford presents another plausible timeline, one that incorporates both historical fact and fiction with the endless possibilities of time travel.Â

Snippet:
â€œWhat?â€ theÂ regent bellowed. â€œNot another Mary, and a Stuart at that. We cannot be related.
Are we?â€ He winced in the dim light and bent forward to take a closer look.
â€œYou have her look about you. It is uncanny. You could almost pass for her. And
that brooch. Where did you get that brooch?â€
â€œI do not know,Â sir.â€ Mary Elizabeth took her time to choose her words carefully. She wasnâ€™tÂ sure how to answer about the brooch, so she steered clear of that comment,Â saying instead, â€œAre not all Stuarts somehow related?â€
It was not theÂ right thing to say. James Stuart, Regent of Scotland, was not amused. â€œGrabÂ her. She must be a spy. Or a traitor. Either is punishable by death.â€ HeÂ pointed accusing fingers at the others. â€œThe rest of you stay here. I will deal
with this troublemaker.â€

This entry was posted on Friday, February 8th, 2019 at 00:22 and is filed under Book Highlight, Romance. You can follow any responses to this entry through the RSS 2.0 feed. You can leave a response, or trackback from your own site.

2 Responses to “GrabÂ her. She must be a spy. Or a traitor. Either is punishable by death”