Anna del C. Dye, as a YA author of High Fantasy and she makes sure her books have highÂ standards and are fit for the whole family.

One day a challenge to write a fairy storyÂ was placed and she wondered if she could write a book about fairies, since all her book were about elf. “Amerine, Fairy Princess” was the result of that thought. This story, with a girl as a main character, received “Fiction Second Place” in the Oquirrh Contest that same year.

Then she wanted to try and see if she could convert it to have a boy as the main character and “Fairy Prince” was born. There are many books were the main character is a girl especially in fairy tales. So she wanted to be a different story withÂ a boy fairy and see if she could reach more boys with this book. In this form, the story received First Place in the Absolutely Write First Page Contest.
When the moment to publish it came, she changed the name to “Emerine’s Nightmare”. “Fairy Prince” would sound to much like a book with gay characters and this book has nothing to do with any of that. 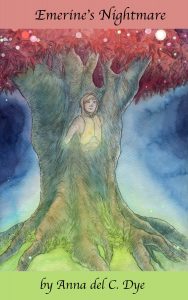 Here is the back cover blurb:

What would you do if one night, life as you know it changes and you are left alone in despair? That is how Emerineâ€™s nightmare starts and now all he does is run.
His family lived at the edge of the forest until dark shadows killed them all. Now they want him, and so does a magic tree. He has never seen dark shadows or enchanted trees before. Emerine has to get to the heart of Red Forest, to the fairy people. Only then he will be safe. Safe? He has never heard of

fairies before and once he gets there what?

This is the beginning ofÂ the book:

In the early dawn, while a dense fog covers the light that should have brightened the new day, I, Emerine, sit at the edge of a quiet pond. Engulfed in the wet blanket of air that threatens to suffocate me, my mind focuses on how everything has changed from just a few days ago.
Itâ€™s been two weeks since we left our home nestled at the edge of the forest. Only three days have passed since the tragic death of my father. That was just the beginning of my nightmareâ€¦because no matter how hard I think about it, there isnâ€™t a reason the shadows should chase meâ€¦except that itâ€™s all a really bad dream. One from which Iâ€™ll wake up at any moment. 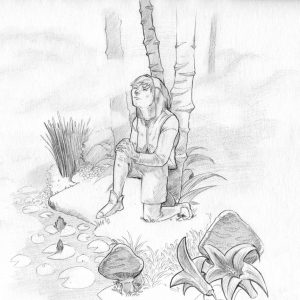 The link to amazon:

Here are some compliments for Emerine’s Nightmare: 4*****

Author Anna Del C Dye once again brings readers a tale filled with mystical beings. Most of her books are much longer and the main characters are elves but in this children’s book, Emerine’s Nightmare, she focuses on the fairy folk.

The characters are interesting. Children will particularly identify with Emerine because of his age and his uncertainty over whom to trust. This book will appeal to children 9 through 15.

Margaret L. Turley RN,
Anna del C. Dye released her new fairy prince story: Emerineâ€™s Nightmare.This unique book takes the reader deep into the forests of fairy world. Frightening shadows come to life. Emerine looses his home and both his guardians to dark creatures that aim to steal his power. He melds into a tree to hide from the enemy only to find out that the tree plans to keep him prisoner. As Emerine discovers his gifts, he learns that things frequently are not what the appear to be. He develops confidence and skills during his journey to find the fairy queen. This tale is bound to become a favorite for little boys, their sisters, parents and lovers of fantasy.

This is a fantasy for children in the 4th-8th grade. My 9 year old grandson is in the 4th grade and one of his assignments is to read 20 minutes every day. We have been reading “Emmerine-Fairy Prince” together. He really likes it. The story has shown us how Emmerine has learned about how good versus evil and about the consequences that follow with the different choices that we make. He also learns about unconditional love. He learns about what real love between a mother and father is.

I loved this little book and recommend it to all children. I would also recommend that parents read this with their children to get the most of the meaning that has been written into this wonderful book.