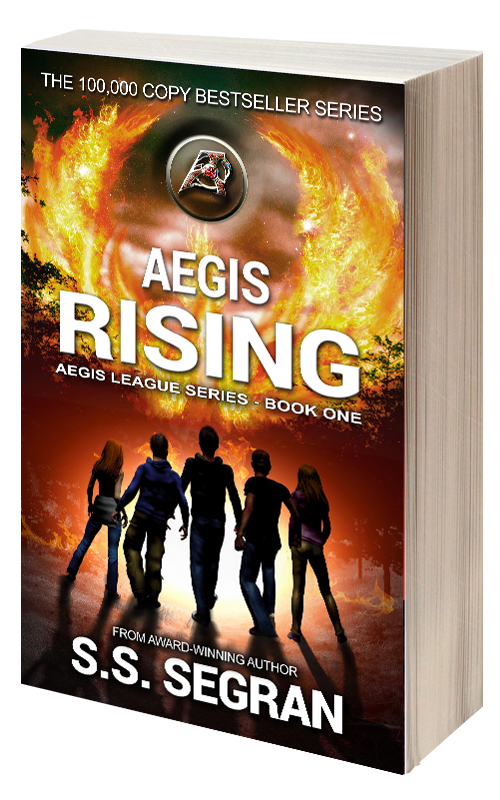 We
had our chance. Our days are now numbered.

Lifelong
friends Jag, Tegan, Aari, Mariah and Kody are cast into an adventure
of epic proportions when their small plane crashes in the remote
forests of northern Canada. They are rescued by a secretive tribe in
a hidden valley who possess astonishing abilities â€” and a
terrifying divination.Â
The
group soon learns that not everyone in the peaceful village means
them well. But the worst is yet to come when they discover a larger,
more sinister force at work outside the valley. And it intends to
remake the world in its image.
Shocked
to learn thatÂ the fate of humanity now rests on their
shoulders,Â the teenagers struggle to accept their new roles.
Armed with powers entrusted to them by an ancient prophecy and the
resilience of their friendship, can the group survive the onslaught
of a ruthless enemy and put an end to its cataclysmicÂ scheme?
If
you likeÂ epic adventure stories withÂ endearing characters
in anÂ immersiveÂ worldÂ then you will loveÂ the
Aegis League series! 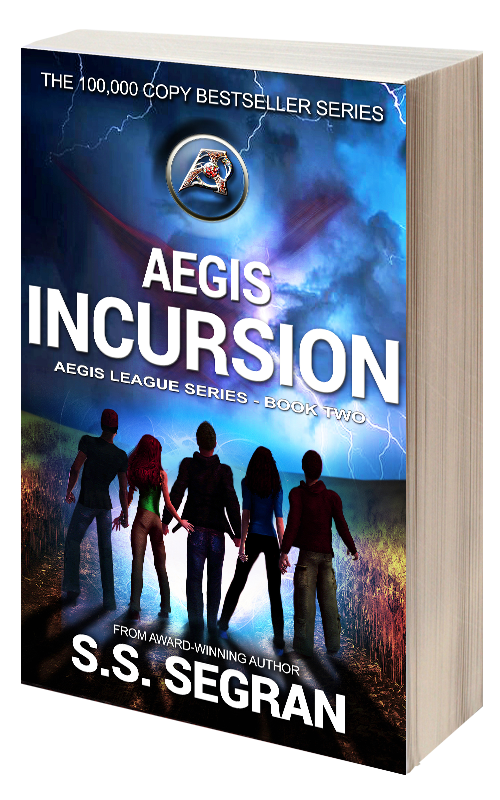 Aegis
League is a multi-award winning series about friendship, courageÂ and
a quest to save humanity. MOVIE RIGHTS OPTIONED.

The
first wave strikes. The assault on humanity begins.

A
mysterious plague destroys crops and leaves swaths of farmland around
the world in ruins. Panic and riots break out. Famine and rebellion
push nations to the brink of war.
With
the memories of their fateful summer suspiciously erased, straining
their relationships,Â Jag, Tegan, Kody, Aari and Mariah must
regain whatâ€™s lost to battle the forces of darkness advancing
across the lands.
Finding
themselves hunted by operatives from a clandestineÂ organization
at every turn, can the group outmaneuverÂ their pursuers and stop
the world from descending into chaos?
If
you likeÂ epic adventure stories withÂ endearing characters
in an immersiveÂ world, thenÂ you will loveÂ the Aegis
League series!

Â
Â “If
Daniel Silva and Rick Riordan had a love child, it would be the young
S.S.Segran. With the intensity of an adult spy thriller and the
relatable characters that teenagers enjoy, Aegis Incursion takes YA
Action, Adventure, and Fantasy to a new level.”Â ~
The OnlineBookClub.org ~ 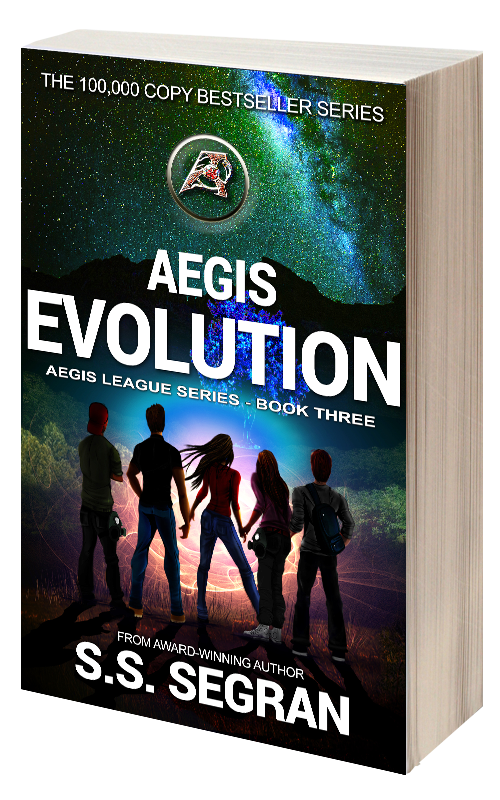 For
fans of Maze Runner, Hunger Games and Percy Jackson comes an
award-winning story of friendship, courage and a battle for humanity.
MOVIE RIGHTS OPTIONED.

The
second wave is unleashed. The world is forced to its knees.

Two
strains of a devastating pathogen infect population centers around
the globe. From mega-cities to remote villages, the descent into
chaos is swift as the disease spreads like wildfire.
When
Jag is injured from an accident, Tegan reluctantly assumes leadership
of the group as they are tasked with their most challenging mission
yet by the Elders of Dema-Ki.
But
things take a turn for the worse when one of them becomes infected
and hovers on the brink of death. The friends throw caution to the
wind and risk everything in their quest for a cureâ€¦ one which, for
reasons unknown, has remained concealed for over two thousand years.
Can
Tegan and the League discover the remedy before a relentless enemy
locates and destroys it, sending millions of lives to their end?
If
you likeÂ gripping action-adventure stories in an
immersiveÂ world, then you will loveÂ the Aegis League
series!

Â
Â “Following
the tradition of the prior two books, readers are treated to chapter
after chapter of fascinating characters, exciting action and
apocalyptic consequences.” ~~
The US Review of Books ~ 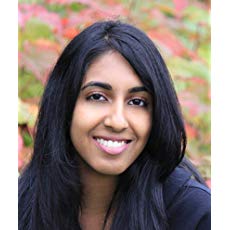 Amazon
Bestselling author S.S. Segran is a lover of books, dogs and all the
popcorn she can stuff her face with. Her genre-defying Aegis League
Series traverses the exciting worlds of action/adventure, sci-fi,
thriller and speculative fiction in the YA universe. Even as she
delves into her creative endeavors, she intends to support youths in
developing countries realize their potential through her non-profit
organization, AegisLeague.org.
Â
When not devouring a novel or
writing one, Segran can be found drawing on paper and tablet, or
tumbling into a black hole of comic books and video games. She’s an
ardent fan of horseback riding and parkour, and having enjoyed
jumping out of a perfectly fine plane at fifteen thousand feet —
perhaps skydiving.
Subscribe to her Aegis Insider reading
group and receive a 10-Volume short story collection and other
exclusive material plus Advance Reader opportunities for upcoming
books. Join here www.aegisnovel.com/insider
Â
Â
Website
* Facebook *
Facebook *
Twitter * Bookbub
* Amazon
* Goodreads

In a hidden valley, a mysterious people gaze at the stormy sky as a glowing object with fiery wings disappears behind a mountain ridge. The astonishing sight reignites an ancient prophecy foretelling the arrival of five chosen ones destined to become bearers of light against a dark storm gathering on humanity’s horizon.
In a distant city, a secretive organization led by a shadowy figure initiates a sequence of cataclysmic events designed to wreak havoc across the planet, beginning with a remote mining site in northern Canada.
As the three worlds collide, unlikely heroes arise. Armed with powers entrusted to them by the ancient prophecy and the resilience of their life-long bond, the five teens take a stand against a malevolent foe.

For a limited time you can get Aegis Evolution (Book Three) for FREE. Visit www.aegisnovel.com

“RECOMMENDED. A title like this is screaming for adaptation as a successful film…” ~The US Review of Books~

“RIVETING! Takes you on an intriguing ride through mysterious forests and mist-covered mountains to corporate boardrooms and global schemes. Prepare to be swept away on a breathtaking journey!” ~SAGE Foundation~

“As a fantasy fiction writer I have to admit that I am a harsher critic when it comes to novels in this genre. Books in this class I feel should be able to captivate the imagination and place you in a different realm. AEGIS RISING accomplishes that and a whole lot more. It is truly a classic in the making!” ~ Michael Beas – Bestselling Author of ‘Strump’ ~

> Winner of the 2014 PINNACLE BOOK AWARDS

On a bright July morning in 1948, a B-29 Superfortress flying a top-secret research mission over Nevada crashes into the calm waters of Lake Mead and sinks, remaining lost for half a century.

It has been nearly a year since five friends – Jag, Kody, Mariah, Tegan and Aari – mysteriously reappeared in a small town in Yukon several weeks after their small plane went down in Northern Canada. All were found unharmed but with no recollection of what happened to them after the accident.

A baffling contagion is spreading across the bread-basket of North America destroying vital crops. As this dark shadow marches across the globe, widespread famine and riots bring desperate nations to the brink of war.

These seemingly unrelated events set the stage for a battle between the forces of darkness and those destined to become the ‘bearers of light’. From ravaged fields in the Great Plains to clandestine installations around the world, the Aegis League must race against time to save humanity.

S.S.Segran spent a good chunk of her childhood exploring the enchanted forest of a million tales in the mystical land of books. In her early teens, she began crafting intriguing new worlds and conjuring up characters who came alive with the flick of her wand… err… pen. Charmed by the magical response to her debut novel from readers around the world, she has embarked on a quest to take her cherished fans on a thrilling journey deeper into the Aegis universe. Even as she delves into her creative endeavors, the author intends to continue her work of supporting youths in developing countries realize their potential through her non-profit organization AegisLeague.org.

When not devouring a book or writing one, S.S.Segran can be found standing behind the cauldron of life, stirring a potion made up of chores, parkour, drawing, horseback riding and–having enjoyed jumping off a perfectly fine airplane at fifteen thousand feet – perhaps skydiving.

The author loves to hear from her readers and can be reached at shirin@sssegran.com