Vanishing Act, a drama or suspense?

In aÂ journey for retribution, lines blur between courage, justice, and revenge.Â
Â 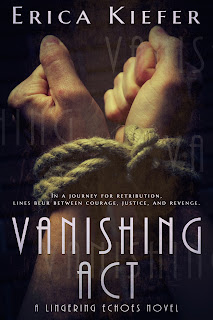 A fresh start at college is exactly what Kate needs to ease the burden of her family secrets. When she meets the confident and charming Aaron Jackson, she weaves a new history for herself to fit into his seemingly perfect life. But the past refuses to stay where it belongs, causing a rift between their contrasting worlds.

When Ben reappears in Kate’s life, she is only pulled deeper into the childhood that she’s tried to forget. Driven by the abuse and pain that still lingers within him, Ben seeks Kate’s help in making a change. But in this journey for retribution, lines blur between courage, justice, and revenge.
Bound by their shared and damaged youth, Kate is forced to choose sides, and fast. The final act is almost here, and time is running out. 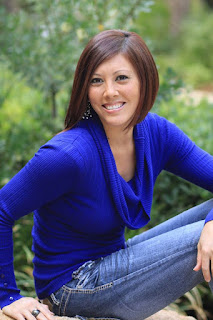 Erica Kieferâ€™s debut novel Lingering Echoes was published by Clean Teen Publishing in November 2013. She continued the series with Rumors (A Lingering Echoes Prequel) and her newest release Vanishing Act. All of her books can be read as stand-alone contemporary YA fiction, touched with romance, emotional drama and suspense. With a degree in Recreation Therapy from Brigham Young University, Ericaâ€™s experiences working with at-risk youth have influenced the realistic and relatable nature of her writing. Her first inspirational non-fiction entitled Borrowed Angel (published in April 2014 with Currawong Press) describes the loss of her infant son and her journey towards healing.

Married since 2005, Erica resides in Las Vegas, Nevada with her four children and can often be found satisfying her sweet-tooth with chocolate-chip cookies and a glass of milk. One day, she hopes to dust off her collegiate rugby skills and dive back into the game.

Facts about the Author

1.Â  Â  Â Â Readers would be surprised to knowÂ that I played college rugby at Brigham Young University.Â

2.Â Â Â Â Â Â I have always wanted to take horseÂ riding lessons and gallop away into the sunset… Ok, maybe not quite that
poeticly, but I wish I had the skills to jump on a horse and take off!Â

Connect with the Author:

Top Ten List:
1. I have lived in five countries including the United States, Taiwan,Â Fiji, Thailand, and Indonesia.Â
2. My mother is from Thailand and my dad from the US.
3. Sadly, I am not bilingual.
4. My husband thought I was Hawaiian when we first met, which is oneÂ reason he was interested in me.Â He figured Thailand was a close 2nd! 😉
5. I am horribly, embarrassingly ticklish on my neck, a fact my familyÂ has abused since childhood.
6. Soda and candy do not tempt me, but baked goods like chocolate chipÂ cookies do!
7. Waffles and crepes with berries and cream will win me over any day. IÂ chose a fancy, scrumptious waffle over a birthday cake this year. Yum!
8. 2nd grade was the year I decided to be an author some day.
9. Ten years of marriage has given me four beautiful, crazy childrenÂ ages 4, 3, 10 months, andÂ one sonÂ in heaven.Â
10. My husband says right before I crash at night, I get silly hyper forÂ five minutes and then I’m out!Â
Â

Check out all the great blogs that are a part of this event by following along on the Facebook page.