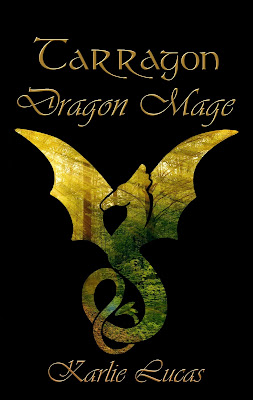 After hundreds of years, theÂ gates to Tarragon are open once more, fulfilling age-old prophecy. However,Â Anwenâ€™s journey is far from over. The dragons still sleep and she has no clueÂ how to wake them. Forced to retreat from the Mountain, she and her newfoundÂ friends must devise a new plan to wake the inhabitants of Tarragon.Meanwhile, the Mage Circle, a group of dragonÂ mages with a vendetta, is camped outside the Gates. Calling on allies of theirÂ own, they will stop at nothing to gain control of the Dragon City and all whoÂ dwell inside.To complicate matters even more, Anwenâ€™s motherÂ has joined the party. But even with the help of all her friends, can AnwenÂ overcome the ordeals set before her or will this spell the end of the dragonsÂ and the world as we know it?
Purchase your copy here:
~Â Amazon US ~ AU ~ CA ~ UK ~

Karlie Lucas is a preschool
teacher by day and a writer/artist by night.A graduate of Southern Utah University, KarlieÂ received a B.A. in Creative Writing, with a minor in art. She is a member of
Sigma Tau Delta, The International English Honor Society, as well as ANWA, theÂ American Night Writers Association.Karlie is interested in all things magical and
mysterious, especially elves and dragons. She is an avid fan of J.R.R. TolkienÂ and J.K. Rowling.When not writing, Karlie can often be foundÂ drawing, baking, watching her favorite old school shows, or just spending timeÂ with her family.She currently resides in Dallas, Texas with herÂ husband and a cat named Kally
Connect with the Author here:Â
~Â FacebookÂ ~Â WebsiteÂ ~
Â ~Â AmazonÂ ~Â GoodreadsÂ ~

Courtney glanced out the window overlooking the dining area as she did. Overhead, something momentarily blotted out the sun. It looked like some kind of bird, though none she could identify. She moved closer to the window, trying to decide if sheâ€™d seen something or not. â€œHey, Tyler, have you heard of there being any kind of large bird in the area?â€

Tyler looked up from cleaning the counter with a dishtowel. â€œLarge birds?â€ He abandoned his cloth and walked over to the window. The hair on the back of his neck began to prickle as he saw another shadow cross over the sun. It didnâ€™t look like the typical fowl.

The silhouette looked like some kind of flying creature. It resembled one heâ€™d seen several years ago. He could clearly see two creatures, even though they were both relatively far away. â€œThatâ€™s not a bird,â€ he warned. He reached for the nearest weapon, which happened to be a wooden walking stick from against the wall.